Amazon.com has a listing for Conventional Wisdom by Arthur Drooker (Glitterati, August 2016), a $35 ($50 discounted to $34.56), 192-page coffee-table book of fine-art photographs of conventions of unconventional costumed interest groups. Among the interest groups and conventions covered, with approximately 20 pages each, are Bronies and Bronycon, furries and Anthrocon, Santa Clauses and Santa Celebration, clowns and World Clown Association, mermaids (including mermen) and Merfest, and Abraham Lincoln impersonators and Association of Lincoln Presenters. Hardcover books of fine-art color photographs of fursuiters and other special-interest costumed groups are rare. Warning: there is a Foreword by the culture critic of Vanity Fair. 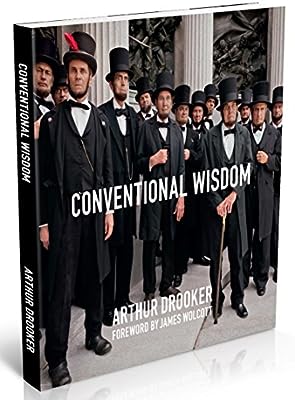 To be (vanity) fair to Vanity Fair, the introduction by James Wolcott is short, gentle and somewhat charming.

Americans tend to find fanciful dress-up a dicey proposition, apart from Halloween festivities, yet another hangover of our Puritan heritage. What might be regarded as bizarre or borderline creepy in the local suburban parish or uptight co-op building—clopping around in an aqua-blue bunny suit, dolling up as a [i]My Little Pony[/i] pink unicorn, or planting an Ozarks-hillbilly ventriloquist's dummy on your knee, for example—is just part of the pageantry in the gathering of fellow enthusiasts and welcoming spirits. No longer an outsider, you are, for a jolly day or two, a Lincoln among Lincolns, a Santa among Santas, a furry among furries high-fiving each other's paws.

Furries are inclined to think ill of VF due to George Gurley’s now rather long-ago “Pleasures of the Fur” article, but the magazine really does have a (very!) long history of excellent writing, and Wolcott is nearly always entertaining. (Gurley’s sin was making the fetish aspect of furry into the hook for his story, which unfortunately set the tone for a lot of media coverage afterward. I can still find a lot of furries writing variants of “well, what else would you expect from a magazine like that,” but honestly, the answer is: better. Because it’s a better magazine than that.)

That sounds like a lovely intro, and quite an intriguing book! Thank you for bringing it to our attention. I think I’ll add it to my wish list for this Christmas.